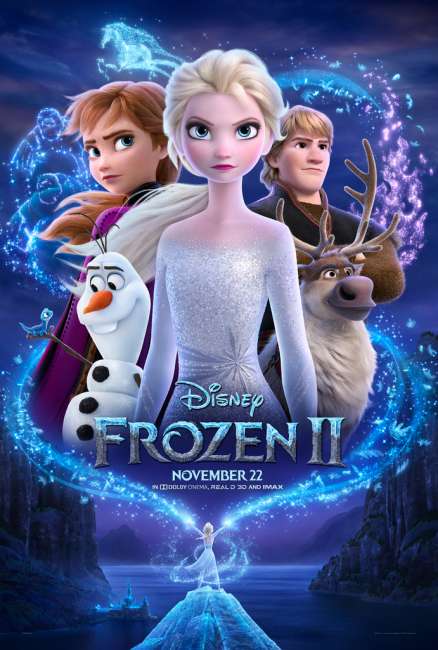 Buck, Lee and Smith join forces to broaden a unique storyline then collaborate with the award-winning composers Anderson-Lopez, Lopez and Beck to use music and song as the film’s transitional statements used from scene-to-scene in order to further a deeper messaged tale. Howard gives his executive stamp of approval from his revered professionals’ labor of love and sets the official US release date for November 22, 2019.

The film would not be complete without the expertise of Disney’s animation artists and the selected cast and crew to bring the story to life. The viewers eyes and ears will be captivated by beauty; and, challenged by a complicated yet fitting narrative that combines myths and fairy tales. For the very young audience the deeper messages (and the subtle influences) will go over their heads but for those a bit older, parents be advised that you may be called upon to define, discuss or explain the impact of a spiritual heritage. The storyline is a bit heavy and sometimes confusing but the screenwriters are challenging us as parents to engage in dialogue with our kids that really is appropriate with a storyline with some depth. Our kids are impressionable at such early ages and they often really do get it far sooner than we want to believe.

Explaining to children often comes earlier than one thinks. My friend’s granddaughter was three years old when FROZEN was released in 2013 and attended the film. Days later the three-year-old was reprimanded for something she did out of deliberate disobedience. The little girl’s response to the parents was not of crying or talking-back she simply stomped one foot to stand at attention, then leaned forward, looked straight in the eyes of the parents and drew with intent her arms and hands up towards them in order to “freeze” her parents’ body, mind and soul in place! Yes…mouth included!

There are several delightful themes that will be enjoyable for conversation. The Disney artists do a great job to open the door for suitable life-like topics for discussion with children using delightful animated characters as an example.

Olaf is hilarious and while he isn’t sure he wants to grow-up he knows that maturity is a good thing and embraces any outcome. Elsa, Anna, Kristoff and even Sven realize this truth which will prove helpful to make the right decisions when called upon.

Aside from the themes of valued friendship and teamwork, the storyline from FROZEN  goes deeper in a mythical sense in FROZEN II addressing the power of nature. Chris Buck says, “Elsa has a gift–the power to create ice and snow.” He continues, “She only recently learns how to control her magic, and only recently reveals her powers to her Kingdom (the people she serves) after years of hiding her gift for fear she’d be persecuted for her differences.” He adds, “Her (Elsa) connection to nature has always been there. But she has no reason why.” The new storyline explains Elsa’s phenomenon, in addition it gives credence to the impact of maturity and teamwork to understand the Kingdom of Arendelle’s destiny.

The Kingdom of Arendelle is ruled by the Royal sisters, Elsa (voice actress Idina Menzel) and Anna (voice actress Kristen Bell) since the knowledge of their parent’s disappearance. The sisters were graced by loving parents and longed to see them again.

When the sisters were young, their parents showed them love by telling stories, poems and singing songs. As children these intimate times put them to sleep but as they grew older their heart and head never forgot the input.

One particular story-time the girls were told about true events of their family history. They had lots of questions. In time they would learn of their heritage and those family secrets held only for maturing children.

Elsa and Anna strive to carry on the duties of their parents in their absence but it’s not easy for these young adults. Elsa is bothered but a mysterious voice that only she hears. It’s calling to her but she doesn’t know to where or why. As the voice becomes stronger and beckons Elsa to follow it, though afraid, she is convinced the reasons for such a journey must be necessary and important. Anna is skeptical of this strange phenomenon her sister experiences but commits to joining her on the journey to follow the voice in order to get the answers to her haunting questions.

The pack between the sisters to never leave each other alone has been a commitment until now. Elsa knows she needs to travel part of this journey alone. However, journey’s would not be the same without Kristoff (voice actor Jonathan Groff), Olaf (voice actor Josh Gad) and Sven who refused to be left out of the adventure so the five embark to unknown territory to follow the voice.

When they enter into a magical world not their own, they meet Matthias (voice actor Sterling K. Brown) and Queen Iduna (voice actress Evan Rachel Wood) who each share with them a portion of their past history. Each tid-bit of information brings them closer to the voice but not without peril. On this journey it’s each character’s growing maturity and the ability to use their strengths to become a team which becomes the key to successfully maneuver through severe trials and tribulations.