WIN: The Adventures of Ninja and Luche: The Great Piggy Rescue 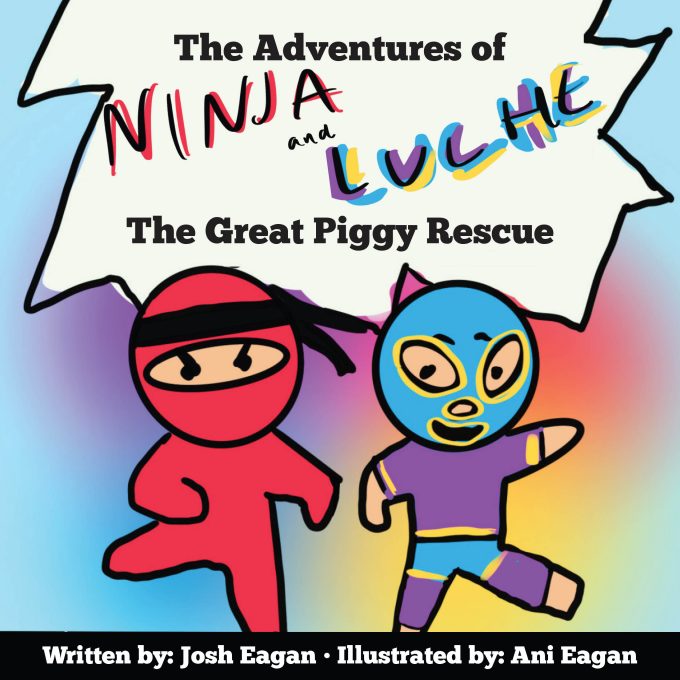 A dad-daughter combo can make the most epic team — especially when it comes to telling a story about superheroes. Josh and Anika Eagan live in the lively, green city of Roanoke, Virginia. Josh heads up the area monthly family magazine, and Ani goes to a super-small liberal arts high school downtown. She’s an artist, and he’s an entrepreneur, and they both love good stories.

So it was only natural that they found their way to authoring/illustrating a children’s book. The Adventures of Ninja and Luche: The Great Piggy Rescue hits shelves today, September 24. The inspiration for this innovative duo’s debut is as cool as the story itself.

Here’s the background: When Anika was 8 years old, she found a ninja mask floating around her house and put it on. Instantly (in her adorable little 8-year-old brain), she was transformed into a superhero. In true sibling fashion, her younger sister Evelyn decided she also needed to have a superhero mask, so she asked her mom to make her a lucha libre mask. Random? Yeah. But you have kids. You get it.

So began the real-life alter-egos Ninja and Luche. Their main deal was pulling pranks — think Home Alone, but without the fire and hot irons.

“We did this one prank where we took a cereal box and put a balloon filled with shaving cream inside it. Then we decorated it like a cake.” That was a gift for their dad on his birthday; unsuspecting, he cut into it, and it exploded all over him.

Fast-forward to now — the girls don’t get into costume so much anymore (although they do still play the occasional prank). It occurred to Josh that those masked “heroes” Anika and Evelyn created when they were little would be make perfect characters for a kids’ book.

So in the book, the characters Monica (who is uncannily like Anika) and Stevie (who happens to be a lot like little sis Evie) are regular kids by day, but superheroes by . . . well, other parts of the day, because they sleep at night. They’re kids.

When the adults aren’t watching, Monica and Stevie become NINJA AND LUCHE, taking matters into their own hands to help people around town.

(While they still retain the “actual” Ninja and Luche silliness, these characters are more about being stealthy helpers than about pulling pranks on people — though the shaving-cream cake does make an appearance in the story.)

We don’t want to give too much away, but the tale involves finding an abducted stuffed animal and returning it to its owner. It also involves a considerable amount of nacho cheese.

When Josh pitched the idea to Ani, she was totally on board to be the illustrator. She wanted to create a distinct style for this story, something different from the way she usually drew. “For this,” said Ani, “I did it all in ProCreate instead of on paper. I wanted it to look silly and cute, so I drew the characters more simplistically than I normally would, less detailed.”

As it often goes with the creative process, The Adventures of Ninja and Luche wasn’t an overnight production. More than a year passed between the initial concept and the glossy, finished book. And the dad-daughter team is psyched about how it’s turned out.

Be one of the first to get your hands on a copy (physical or digital), and let us know what you think!

Click here to find The Adventures of Ninja and Luche: The Great Piggy Rescue.

WIN: 24/7 Moms and Josh Eagan are giving away a Signed Copy of The Adventures of Ninja and Luche: The Great Piggy Rescue to 2 Winners!


Enter for a chance to win using the Rafflecopter entry form below. For every entry you do it’s an extra entry to win.


US entries only and one entry per person. Winner will be chosen on October 26, 2019.

Disclaimer: I have teamed up with Josh Eagan in support of this campaign. We received compensation for participation in this campaign. However, all thoughts and opinions are my own.