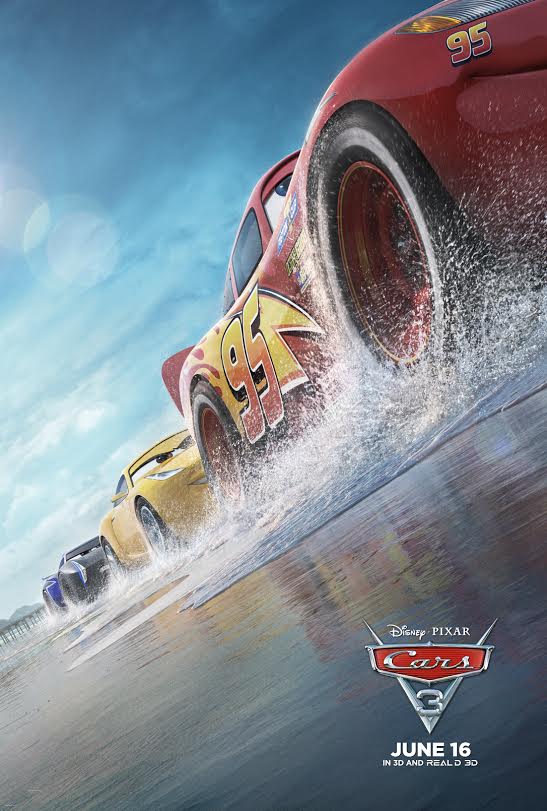 DISNEY PIXAR animation Studios features the legendary Piston-Cup champion #95, Lightning McQueen (voice of actor Owen Wilson) with their latest car-racing adventure in CARS 3. Producer Kevin Reher notes, “The storyline mirrors issues real-life athletes face later in their careers.” The Studio brings to light the issues that rise when champions get too old for the sport they love. Eventually, generations of younger athletes push their mentors out of the sport due to a whole new level of skill, confidence and energy. It’s a natural progression but hard to handle. The difficulty to be pushed aside due to age can be emotionally traumatic. How do champions handle this phase?

Director Brian Fee talks about the deliberate storyline. One of their goals was to build ‘the next-gen racers” in such a way that it would be obvious to the viewer that the cars were very different from Lightning McQueen. More modern, attractive and high-tech. “The younger generation of racers are cool.” Fee says, “You see cars like Jackson Storm (voice of Armie Hammer) are effortlessly fast, sleek and aerodynamic.” Beyond impressive!

“We did a lot of research,” says Fee. “We looked at athletes in other sports but really focused on NASCAR drivers. They start at such an early age and their lives are centered around driving.” He adds, “We even talked to a sports psychologist who explained that many of these drivers can’t imagine doing anything else.” NASCAR veterans like Champion Jeff Gordon and Ray Evernham were consultants and describe, “Young racers are full of energy. They like to go fast and hard, while a more experienced driver knows he doesn’t have to do that.” Co-producer Andrea Warren adds, “They [the experienced driver] get to know the game well enough to that they can play it in a different way.”

Screenwriter Mike Rich said, “The ideas resonated, and became the motivation for Lightning McQueen’s journey as he faces newer, younger racers.” Rich continues, “It’s kind of a timeless story in sports.” What deepens the appeal in CARS 3 is that mentorship is an important theme. Lightning McQueen was trained and mentored by a wise racing champion, Doc Hudson (voice of Paul Newman). The absence of a good trainer and mentor leaves the athlete at a loss until others step-in to lead and guide when it is least expected. Screenwriter Kiel Murray adds, “I think what will really resonate wth audiences-especially adults-is this idea of finding meaning as we age.” He continues, “Finding a way to be valuable in every phase of our lives, and giving back to the next generation in a way we don’t ever think about when we’re just getting started.”

The lovable race-car driver #95, Lightning McQueen is back on-the-track fighting to hold on to his champion title. He’s faced with the realization that the up-and-coming ‘next-gen’ racers are amazingly fast and tough to beat. McQueen needs help. His confidence is tested with the new high-tech cars that seem to enjoy leaving him in the dust.

A severe accident on the track leaves Lightning battered, bruised and humiliated. Devastated and discouraged, Lightning isn’t sure what his future holds. An avid fan steps-in to sponsor Lightning for the big race. He helps get him back on the track by using the best high-tech practice tools available for training purposes. Even the ‘next gen-racers’ are jealous. However, certain stipulations arise. One being that Lightning will train with a young, spirited racing enthusiast, Cruz Ramirez (voice of Cristela Alonzo) whom Lightning has issues with regarding her intense training program.

The journey of a life-time begins for Cruz and Lightning as they team-up to win the big race to show the world the makings of a Champion. As fate would have it, both discover that simply being the fastest racer doesn’t always mean you’re the winner.