In the modern an 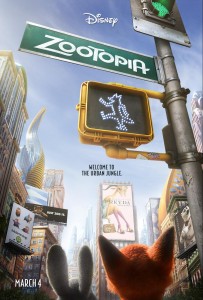 imal kingdom, every progressive mammal aspires to live in the metropolis of Zootopia. A place where animals are welcome from every corner of the world. It’s an orderly society with the opportunity for one to be anything one dreams. Sound familiar?

Filmmakers Byron Howard and Rich Moore are privileged to co-direct Walt Disney Animation Studios’ 55th animated feature Zootopia. The collaboration with screenwriters Jared Bush and Phil Johnston, as well as, the award winning composer Michael Giacchino (his first-ever featured collaboration with Walt Disney Animation Studios) along with the collection of Hollywood’s famed voice over talent round out a quality team of experts to tell Zootopia’s story.

For 92 years, Walt Disney Animation Studios (WDAS) has created a wonderful legacy of stories told by talking animals–Mickey Mouse, Bambi, Dumbo, The Jungle Book, Robin Hood, etc. Director Howard says, “We all grew up watching the great Disney animal films. We were immersed in those worlds.” He continues, “My favorite childhood film was ‘Robin Hood.’ We wanted to honor the Disney legacy with Zootopia but in a new and different way that dives even deeper thematically.”

Director Moore says, “At its core, Zootopia, is a buddy movie. Our main characters Judy and Nick–a rabbit and a fox–are natural enemies.” He continues, “They don’t exactly get along. They come to the relationship with ideas about each other. Beliefs that aren’t informed or accurate.” 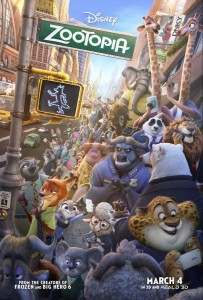 Howard notes that the fact about buddies not getting along is what gives their film comedy. He says, “Judy is the eternal optimist who believes anyone can be anything. Nick is a cynic. He believes we are what we are.” Nick, the realist, takes full advantage of the country bumpkin excited about big city life and teases her to no end, but Judy holds her own and in a way that shocks even Nick.

Executive producer John Lasseter believes that the main requirement for great storytelling is research. Research is the foundation for all of Walt Disney Animation Studios’ films. Howard recalls that about eighteen months of solid research into animals went into the Zootopia project. The team trekked to places like Africa, Disney Animal Kingdom, San Diego’s Wild Animal Park for observation and interviewed experts including those found at the Natural History Museum of Los Angeles. Howard said, “We studied how animals interact in the wild, how they socialize and how their individual communities are built in the natural world.”

Howard shares a couple of interesting findings that they used in their Zootopia world. He said, “We found that 90% of animals are prey. Only 10% are predators. We assumed that predators ruled the animal world but they are the minority.” He adds, “Anytime you have a majority vs. a minority, social issue arise. We also learned that the animals tend to stay with those that look like them. Naturally they find refuge and protection within their individual groups and tend to avoid animals that are different.” This was information that allowed their Zootopia take on form. They were able to develop a storyline for their animated characters to deal with stereotypes and bias. A message of deep importance while having fun with the variety of animal characters in their Zootopia.

Newly deputized Zootopia police officer, Judy Hopps (voice of Ginnifer Goodwin) is fulfilling her dream to serve the citizens of Zootopia while on the police force. To fight crime and make a difference in her world. A rookie and the first bunny officer on ,Zootopia’s police force, Judy faces numerous hurdles. The first being to overcome that being small in size among big, tough colleagues shouldn’t matter in order to do a good job. Zootopia’s gruff police chief Bogo (Idris Elba), is annoyed at having a bunny on the force. He first of all denies her a partner. Secondly, assigns her to the meter maid job. Writing parking tickets all day long is not Judy’s idea of catching bad guys. Embarrassed to be given such a menial task, Judy takes the assignment in stride and eventually it proves to her benefit.

Judy does more than ride around in her meter maid cart all day. Judy pays close attention to the activities of her hood. It’s her observations of suspicious activities that connect her with Nick Wilde (voice of Jason Bateman), a confident, fast-talking, scam-artist fox. Judy catches Nick in fraudulent activity. She unabashedly confronts Nick. In her attempt to prove herself worthy of fighting crime, she attempts an arrest. Nick escapes but Judy is determined to bring him to justice.

While in pursuit of sly Nick, their cat-and-mouse chase lands them into the middle of a frightening crime caper. To escape the two need to depend on each other. Their initial relationship of banter forces them into a close uncanny bond of trust. One that just might help each realize their Zootopia dream.