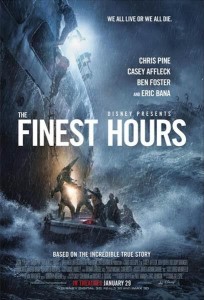 Based on the non-fiction book, The Finest Hours by Casey Sherman and Michael J. Tougias, filmmaker Craig Gillespie brings to the silver screen their incredible story. Sherman and Tougias’s description is a fine example explaining the strength of the human spirit and a hope unwavering. Co-produced by Walt Disney Pictures and Whitaker Entertainment, Gillespie directs the epic film under the same name authors Sherman and Tougias gave their book. Gillespie creates a visually stimulating cinematic thriller, of epic scale to recall the most heroic rescue mission recorded in the history of the U.S. Coast Guard.

Producer Dorothy Aufiero says, “The SS Pendleton (the 500-foot oil tanker) rescue was front page news at the time (1952), but not everyone today is familiar with the story.” She adds, “Including the families of the men who were part of the rescue itself.” It was not uncommon for men who handled heroic feats in this era to keep it to themselves. They didn’t think it was out of the ordinary. It was their job. To accomplish the task-at-hand was reward enough. It was nothing special in their mind.

Currently, two lone survivors are alive today who were directly involved with the February 18, 1952 mission: Coast Guard engineers Andy Fitzgerald and Mel “Gus” Gouthro. Fitzgerald who was the Coast Guard third-class engineer, stepped in for his friend and senior engineer Gouthro, who was sick the night of the rescue and could not join his crew. Gouthro took Fitzgerald’s place out of duty. Both men, friends to this day, were instrumental in helping the filmmakers in the early stages of the films development to ensure the facts and details were authentic, important to Gillespie’s film to recreate their ordeal. The two remember the historic night as if it were yesterday.

Gillespie needed to get the story right out of respect for the four men’s gallant efforts. To accomplish this task the film had to be faithful to the actual facts documented. He notes, “We wanted to be very specific, very clear and technically accurate with events involving the real people in the story.” The grand scale of the cinematography and other technologically stimulating effects prove to tell their giant story. But, to the men who appeared to be larger than life they shut the heroic notion down claiming it was all in a days work.

Fitzgerald recalls, “Some people still look a the Pendleton rescue as a suicide mission, I never saw it like that.” He continues, “We always said about each mission, ‘You have to go out, but you don’t have to come back’. Our job was to save people and that’s what we did.” Gouthro adds, “Those four men went out and did their job.”

Along the upper New England coastline, on February 18, 1952, a gigantic nor’easter (sea storm) hit and had no problem destroying anything in its path. This particular seaboard is a common route for huge oil tankers. According to the U.S. Coast Guard there were five tankers traveling the coast that day. Two of five, 500-foot oil tankers, were caught dead-center in the eye of the storm.

The SS Pendleton and SS Fort Mercer, bound for Boston, Massachusetts and Portland, Maine, suffered intense damage. The storm ripped both vessels in half trapping most of their crews. First assistant engineer Ray Sybert (Casey Affleck) aboard the stern of the Pendleton rallied his crew to work together to keep the ship afloat for as long as possible. Hoping to be rescued.

The U.S. Coast Guard working the station in Chatham, Massachusetts were busy helping the local fishermen protect their boats from the storm when they received information that two tankers were in trouble in near-by waters. The news silenced the men. Those available at the station that night were next in line for the rescue. It was a death trap and each man knew it. Just months earlier they lost one of their own to such a mission.

Warrant Officer Daniel Cluff (Eric Bana) ordered Captain Bernie Webber (Chris Pine) to take his crew and be in command of their CG 36500 buoyant lifeboat and head to the tankers to search for survivors. Obedient to orders on the call of duty, Webber and his crew of three men on board the 36-foot motorized, wooden lifeboat made only to hold twelve men, left the harbor. Before they reached the wide-open sea the hurricane winds took the little boat’s windshield, compass and almost its crew. Now more than before, it was a suicide mission but the four all agreed to keep going until they found something or someone.

To their amazement, in the middle of 70-foot waves, frigid temperatures and zero visibility their spotlight located half of the Pendleton tanker nudged up against a sandbar. Shocked that the severed ship was afloat they searched for life. Amazed at what they saw lined along the top deck of the vessel were survivors. Webber and his crew counted thirty-three total.

They were overjoyed at the sight of men alive. At the same time, emotionally sickened knowing the capacity their little boat could carry in calm seas. As the seas continued to rage, how would they choose the eight to rescue? Webber and his crew began the rescue. They gave hope to the weary. But their mission to save lives was just beginning. (Karen Pecota)