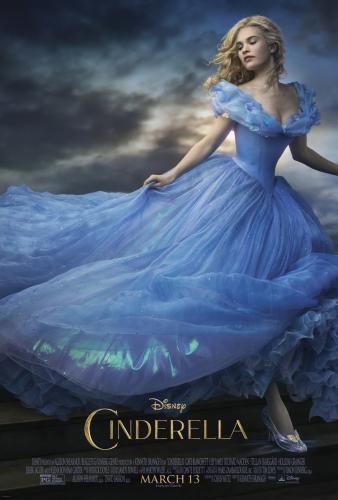 The Walt Disney Studios brings to life a feature motion picture of the classic fairy tale Cinderella. The Disney Classics film vault opens up to reveal timeless images of the studio’s 1950 animated masterpiece. Their unique images give birth to a version of Cinderella for a new generation. To magically enchant the human soul the new film showcases fully-realized characters, elaborate costuming and visually-spectacular cinematography. The spirit of the Studios founding father, Walt Disney truly lives on.

Disney’s animated film version of the classic fairy tale is honored by the American Film Institute’s list of the “Ten Greatest Animated Films of all Time.” It is by far one of the Disney Studio’s most beloved works of art.

The fairy tale came to life with Disney’s release of their 1950 animated version but the story dates back to the first century. The story of Cinderella is now found in over 900 different cultures. The Disney Studio explains, “The earliest known version of the story is known as the Egyptian tale from the Greek historian Strabo.” Adding, “In 1697, Frenchman Charles Perrault’s interpretation was published under the name Cendrillon or The History of the Little Glass Slipper. He introduced the fairy godmother, pumpkin carriage and glass slipper. In 1812, the German Brothers’ Grimm interpretation known as Aschenputtel, replaces the fairy godmother with a bird.” Throughout time some parts of the story have been altered. Perrault’s version is most similar to Disney’s animated Cinderella. The thread of Cinderella’s message remains intact: goodness triumphs over wickedness.

Synopsis:
Ella (Lilly James, Downton Abbey), the daughter of a local merchant and his loving wife, is a kind-hearted child. She lives happily in a well-to-do family. In her teenage years, Ella’s mother takes ill. And, dies suddenly. The loss pains Ella’s heart. Her sorrow is comforted every day by her mother’s last words of wisdom spoken to Ella before her passing, “…to have courage and be kind”. These words will be the strength to guide Ella’s life more than she will realize.

Time passes and Ella’s father remarries. Excited to have a new stepmother (Cate Blanchett) and two stepsisters, Anastasia (Holiday Grainger) and Drisella (Sophia McShera); Ella quickly learns they are not excited about their new situation. The three new family members are mean, self-ish and unkind. They care only about her father’s wealth. No sentiment for Ella or her father.

Ella’s father passes while on a business trip. Ella is left to deal with a new life that takes a turn for the worst under the guardianship of her jealous stepmother. To save money the stepmother fires the household help. Forces Ella, as her new slave-girl, to tend to all the household chores. -including tending the fireplaces of the mansion. In mockery of her appearance, Ella’s new stepsisters give her a new name when they see he covered in ashes, Cinder-ella.

Ella in her rage of despair escapes for a few short hours into the woods when her new family leaves the compound for a shopping spree. The beautiful wooded terrain is Ella’s happy place.

It is in these woods Ella meets Kit (Richard Madden, Game of Thrones), alias The Prince, to which he does not reveal. Kit thinks he is rescuing her from a runaway horse. Ella is impressed with his chivalry. More so by his kindness. Ella is convinced that she has found a kindred spirit and hopes to see him again one day. In turn, Kit is struck by her kind continence. But, notably her courage to race wildly in the woods on horseback. He is equally hopeful to one day meet her again. Possibly at the ball his father is throwing for him. It will be at this event Kit will choose a maiden from the Kingdom to be his wife.

The talk of the town is the ball and Cinderella is excited to join her stepsisters at the grand event. Unfortunately, her stepmother has other plans for her slave-girl. Cinderella is banished from attending the ball. Cinderella is heartbroken to be treated so badly but continues to hope for a chance to be redeemed.

As fate would have it, Cinderella’s Fairy Godmother (Helena Bonham Carter) comes to the aid. With a Bipp-a-dee, Bopp-a-dee, Boo…the Fairy Godmother uses her magic wand and fairy dust to beautifully transform Cinderella and all her little friends. For a few short hours Cinderella’s dreams come true to enjoy a magical night to remember. Never imagining that the loss of her glass slipper would be the item her kindred spirit would use to find true love.