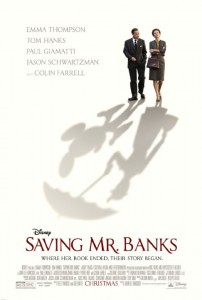 Walt Disney Studios Motion Pictures “flies their kite to the highest heights” in Saving Mr. Banks. Walt would be proud of his entertainment company for the effort made to get the story right. And, with excellence! Inspired by true events film director John Lee Hancock brings to life the back story of how Walt Disney’s revered classic film Mary Poppins came to fruition.

There have only been three films depicting Walt Disney (the iconic entrepreneur) and Saving Mr. Banks is the first feature-length drama. Disney’s classic film Mary Poppins won five awards (best actress, effects, film editing, original score and song) out of thirteen nominations–an incredible accomplishment in filmmaking during the 60s. In addition, The Sherman brothers, Richard and Robert, wrote almost all the songs for the Disney classic film Mary Poppins. Their efforts proved to be remarkable and painstaking as noted in the film, Saving Mr. Banks. Their reward came in 1965 when the film Mary Poppins received thirteen Oscar nominations. Two of the wins were for the Sherman brothers’ song, “Chim Chim Cher-ee” — in the category for the best original score and song.

Walt Disney’s ability to create a fun-filled fantasy world for the young and old stems from burdensome memories of his own childhood that kept him from simply being a kid. Walt’s world didn’t allow his brother, Roy and himself to delight in boyhood adventures exploring a natural child-like world. It forced upon them the intense labor necessary to help keep the family business alive. That’s just the way it was. The Alias Disney family business often robbed the boys of being boys. The horrific workload put on them to deliver the local newspaper day after day (both the morning and evening editions) didn’t give Walt and Roy time to adequately handle their school work much less childhood play.

The screenwriters Kelly Marcel and Sue Smith were privileged to detailed information shared in the Disney family archives and the private family museum. They were able to give an accurate account from Walt’s real life memories, of his encounter with P.L. Travers, to formulate one of the most touching story lines of all time for the latest film from Disney Studios in Saving Mr. Banks.

Walt’s two daughters beg their father to make a movie about one of their favorite books from a series of stories written by author P.L Travers about a magical nanny, Mary Poppins, who comes to help the Banks family while in need. Walt gives the girls his word, like every father longing to please his children; yet, unaware of the years that it would take to keep his promise to make their dream come true.

Pursued by Walt Disney (Tom Hanks) over a period of twenty years to put one of the children’s books by author P.L. Travers (Emma Thompson) onto the silver screen, the known literary genius finally gives way to the entertainment guru. Travers is in financial ruin and needs money.

Reluctant and annoyed to have to entertain the idea of giving away rights for a film deal to survive, Travers heads to Los Angeles, California. Literally burring bridges with everyone in her path by her abstinent personality and curt English mannerisms, life with Travers is anything but pleasant for Walt and his staff. Perplexed with the reasons for such a strained working relationship with Travers, Walt is determined to get to the bottom of the matter. Just, stymied, as to how. At the weight of loosing all hope of securing the rights for a film Walt knows will be a success, he comes to realize that he must chase after Travers’ personal story to find out the depth of her devotion to Mr. Banks (Colin Farrel). Walt figures the answer lies in that relationship. It’s from Walt gentle persistence that Travers comes to recognize she shares more similarities with the iconic Mr. Disney than meets her fancy.