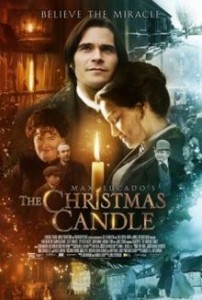 under the same name and direction of filmmaker, John Stephenson. Some years ago Lucado

Christmas Candle. Newman says, “I fell in love with the story. It was a wonderful concept.” He

responded to Lucado, “If you write it, I’ll make it into a movie.” The rest is history.

Internationally renown, Lucado’s popular narratives have been translated into over forty

languages. Lucado draws on his seasoned expertise to create the idea of his Christmas Candle

in order to engage readers with a timeless and inspirational story about miracles. Screenwriters

It’s the Christmas season and the village of Gladbury, England is awaiting the arrival of David

Experienced. Though young, Richmond’s sermons are well known throughout the country. Lady

hand. Recommended by Lady Camdon (Barbara Flynn) who feels certain the new Vicar is the

Richmond isn’t so confident. The emotional pain and suffering he has endured at the tragic loss

of his wife and child has left him hopeless. His faith is weakened and more so his belief in the

miraculous. No doubt Lady Camdon is not surprise and holds firm that Richmond is in the right

Richmond has come to serve a community that believes in miracles. Gladbury’s archival tales

the candles made during the holiday season. Whoever purchases the candle and lights it on

Christmas Eve receives a miracle. Richmond learns that the Gladbury folk truly believe in the

legend and he scoffs.

but that the people themselves make them happen from good deeds. The practical help is at

the root of all miracles says Richmond. He sees that the help brings hope which comes from the

people. Richmond leaves God out of the equation so God appoints the Candlemaker and his

it can bring. God chooses to use a comedy of errors as His tool of choice.