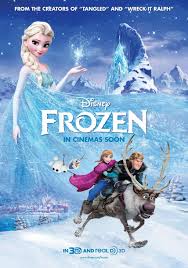 Inspired by Hans Christian Andersen’s “The Snow Queen”, Walt Disney Animation Studios takes their latest animation feature FROZEN to a whole new level in creative storytelling. The addition of song and dance endears one at any age. Under the direction of filmmakers Chris Buck and Jennifer Lee, the use of Lee’s screenplay presents a delightfully comedic rendition of a tale about what is at the heart of true love. According to FROZEN’s iconic snowman, Olaf (voice of Josh Gad) who reiterates the fact that, “Some people are worth melting for.” It is with this idea that an adventurous journey takes place to discover the lengths one will go to protect true love.

Two devoted princesses from the Kingdom of Arendelle sadly grow apart from their initially close relationship when the older sister, Elsa (voice of Idina Menzel) inherits a magical curse within her finger tips, given at birth. The magic initially appears to be a tool used for delightful beauty. Over time it becomes apparent that the curse strengthens with age and needs to be controlled or it will produce evil. If left out of control the curse is dangerous for anyone or anything that gets in its path.

The sisters share a wonderful childhood especially playing in the snow–their favorite game. The younger sister Anna (voice of Kristen Bell) is in awe of the innocent magic that comes from Elsa’s fingertips. As the two age, Elsa’s powers become dangerous to Anna. The King and Queen of Arendelle– the girls’ parents–`are forced to separate their daughters to reside in opposite ends of the Kingdom until the curse can be broken. It’s for the protection of all involved. The search for a cure is eminent. Tragically the King and Queen lose their lives trying to find a cure.

Sadden and lonely at the loss of their parents each princess is not allowed to cling to the other for comfort. Anna is never told the reason the girls have been separated. But, knows it is painful to have no contact with Elsa. The pain grows stronger year after year the girls are apart and hardens their broken heart. Each longing the kindred spirit they once shared.

Years of loneliness pass. Upon the day of Princess Elsa’s coronation to the throne of Arendelle, the girls are thrilled to be able to see each other. Unfortunately, all is revealed from the stress of the event. Stress being one cause that intensifies the curse put on Elsa producing an evil side. Frightened and ashamed, Elsa flees to the mountains in order to protect her beloved sister and the people in her Kingdom from an untamed destructive curse.

Anna is awakened to the pain it has caused Elsa for years and naively refuses to accept the magic as a hindrance. Together with three hilarious mountain buddies, Olaf the Snowman, the orphaned rugged mountain man, Kristoff (voice of Jonathan Groff) and his trusty reindeer, Sven, the little team journey to find Elsa. Once found they explain to Elsa the tragedy that befell the kingdom of Arendelle on her account–the state of an eternal winter. Fearful there might be no end to the destructive curse, Elsa retreats. Anna believes for a better outcome and asks her special friends for help to save Arendelle. Kristoff, Sven and Olaf do their best but their loving and crazy efforts might not be good enough.