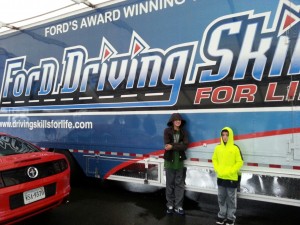 In honor of Teen Driver Safety Week (October 20-26) I wanted to share some of Ford Motor Company’s top safety tips for teen drivers.

Teen drivers are a particularly high-risk group because they lack behind-the-wheel experience.  Analysis of NHTSA’s traffic data shows that in 2011 there were about 2,300 traffic fatalities involving teens between the ages 15 – 19. Ford helps teens stay safe behind the wheel through programs such as Driving Skills for Life, which teaches advanced driving skills to new drivers to help them gain critical experience in difficult situations.

Teen drivers are a high-risk group because they lack behind-the-wheel experience.  In a survey of 500 teens and 500 parents of teens, polling firm Penn Schoen Berland found:

·         More than half of the teens said they become distracted by others in the car, including 56 percent of boys and 63 percent of girls. There are many different sources of distraction including talking on a hand-held cell phone, texting, grooming, eating, drinking, using GPS, and even manually adjusting the radio or MP3 player.

·         40 percent of teens surveyed admit to speeding “sometimes, often or always.” Speeding is a contributing factor for crash risk and higher crash speeds may have a higher injury risk.

Experts from Ford’s ‘Driving Skills for Life’ offer these tips on how teens (and their parents) can be safer drivers:

1.    Engage in the driving process – As teens get closer to earning/acquiring their learner’s permit, parents should actively engage with them about driving. Talk about safe driving behaviors, practice with them, seek educational opportunities, and be clear that unsafe actions won’t be tolerated.

2.    Buckle up – It’s the law. In a crash, a person not buckled up is much more likely to be injured or killed than someone wearing a safetybelt. Always buckle up and require all passengers to buckle up for everyone’s safety.

3.    Never speed – Research done for Ford’s ‘Driving Skills for Life’ shows that if parents speed, their teens are more likely to do the same. Speed-related factors continue to be reported in about one-third of all traffic deaths nationally.

4.    Don’t drive distracted – By setting a tough “no distractions” rule for teens, young drivers will keep their hands on the wheel and eyes on the road.

5.    Don’t follow too closely – Keep the proper distance from the car in front of you. Remember that the faster you drive, the longer it takes to stop. Doubling vehicle speed can nearly quadruple the distance required to stop.

6.    Limit the number of passengers – Graduated Driver License laws restrict the number passenger for novice drivers to help reduce the potential for distraction and focus on the driving task.

7.    Never drink and drive – Under-age use of alcohol and illicit drugs is illegal, and combining alcohol or drugs with driving can be deadly at any age.