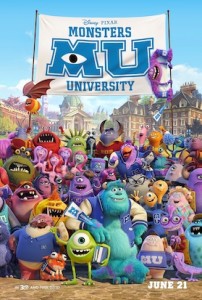 Doors are a visual and a focal point in the storyline of the feature Monsters, Inc. Docter takes this visual to the next level. He uses the door and its natural purpose to address a cultural half-truth that kids are taught in movies these days, “If you try hard, believe in yourself, you can do anything!” Really? Docter wanted to make the storyline more realistic and asks the question, “What do you do when your dream is crushed?” Story supervisor, Kelsey Mann says, “A big part of this film is facing reality.” The reality that life is harsh and dreams get crushed is real. So, walk through another door where that dream is better suited to you–a theme revealed to Mike and Sulley.

The idea that Mike and Sulley attend University together presents a fitting back story. Lasseter notes, “College is the time when we all have so much optimism and confidence that we can change the world. We have dreams and goals.” College students are unstoppable, right? Lasseter adds, “Realty hits and we start hitting closed doors. When you hit the closures, it’s what you do when your dream is shattered that really formulates who you are.”

Scanlon believes the key to figuring these issues out is often revealed through the relationships we form.  He shares, “No matter how hard we try, we can’t do it alone. Nobody can. So we turn to others–and they turn to us–and we really start working on what we’re going to be. The tricky part is putting together our team of relationships.”  The right team, according to Scanlon is one that readily walks with us on our journey of self-discovery knowing that it can be difficult. Mike and Sulley’s coming of age story shows the importance of sharing their journey with others. It’s the right relationships that help Mike and Sulley figure out how to deal with disappointments that shatter their world of broken dreams.

Mike Wazowski’s first day of Monsters University is exhilarating. He is finally at the higher learning institution of his dreams that will help him pursue the occupation of a scary monster.

He recalls the first time he thought about going to University. It was years earlier on a field trip to Monsters, Inc. Together with his grade school class and teacher, Mrs. Graves (Bonnie Hunt), Mike remembers the company tour as impressive. And, the moment he got separated from his class. He accidentally entered the forbidden zone–a door to a child’s night time bedroom. The door led to a darkened bedroom used by monsters to practice being scary. Mike observed a veteran Monster tactfully scare a child–the ultimate monster goal. The reward being the blood curdling child’s scream from being frightened. Since that memorable day, Mike’s life long dream was to be a scary monster and attend Monsters University to enter the School of Scary Monsters Department.

Mike fulfills the first part of his dream. He’s ready to learn from the best. The entrance exams for the School of Scary Monsters are not easy; therefore, to get into the specialized program Mike studies hard. He faces one slight problem: Mike doesn’t look scary. Mike doesn’t act scary. Mike is kind and cute. The perfect combination to be ridiculed by his classmates for trying to study to be a scary monster.

James B. Sullivan (Sulley), on the other hand, doesn’t understand why he has to study to be a scary monster. He’s a natural and has a scary reputation. Sulley must count on  his natural abilities and family legacy to enter the School for Scary Monsters because he is simply not a good student.

Downtrodden Mike and Sulley both sign up for the Scary Game, the University’s ultimate contest run by Dean Hardscrabble (voice of Helen Murren) to prove ones scariness. The catch is that Mike and Sulley must be on a team to play. They have no team until the two are forced to join the University’s worst non-scary monsters team in history. Mike and Sulley are humiliated! Each believes they are the answer to their team winning the Scary Game. Their teams’ race to the finish line, takes a few harried twists and turns from their arrogant behavior. The value of each team member’s strength unfolds. Team work becomes fun putting in a whole new dynamic to win The Scary Game.