Helping Kids Learn to Verbalize and Deal with their Emotions 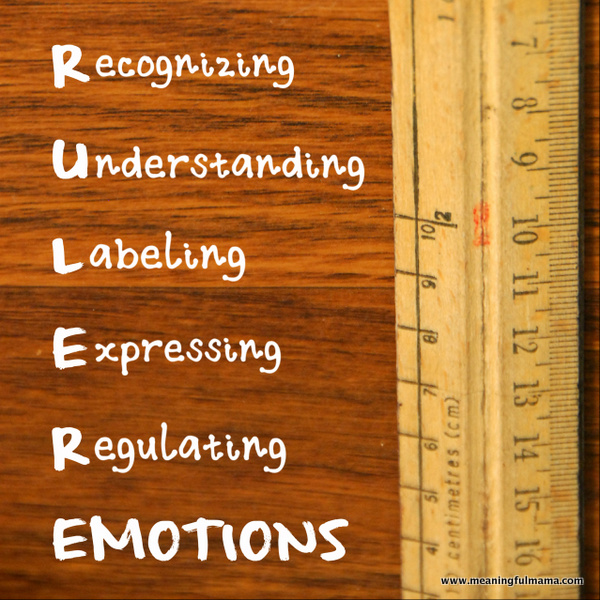 Written by Jodi at Meaningful Mama

Kids often don’t have the words to know how they are feeling. This lack of understanding leads to great discouragement and an internal struggle that can often lead to a tantrum or angry outburst. In the book, “Brain Rules for Babies,” by John Medina, he says children’s bodies “can feel fear, disgust, and joy way before their brains can talk about them. This means that children will experience the physiological characteristics of emotional responses before they know what those responses are. That’s why large feelings are often scary for little people; tantrums often self-feed because of fear.” He goes on to describe what it means for a child to identify their feelings. My daughter freaked out today because she couldn’t get a car that was stuck in another toy. She was yanking it with all her might. First, I told her to get control of her emotions. Self control is one of the most important things kids need to learn. She was able to get control, but if she hadn’t I would have sent her to the stairs to get a happy heart. Once she was calm, I explained to her that she was feeling frustrated because she couldn’t get the toy out. Make sure that you can define the emotions children are experiencing – frustration, anger, fear, jealousy, hurt, etc. If they can understand there is a word that legitimizes their feelings, it will often have an immediate calming effect. My next step was to teach her how to deal with her feelings. In this case, I had to teach her that responding in frustration by yanking harder and freaking out was not going to give her the results she was seeking. I showed her the best thing to do was recognize the frustration, remain calm and figure out the problem. I showed her which part of the toy was stuck and how to slowly rotate it to remove it from the stuck position. I also try and be self-reflective by verbalizing my own emotions for our kids. Feeling frustrated is a very good example for me. I might need to apologize to my kids and ask for forgiveness. I lost it with my kids yesterday. I yelled at them. I had to gain my composure and come back immediately asking for forgiveness. I said, “I’m sorry I just yelled at you. That was not the right thing to do. I was frustrated because I had asked you to wait patiently for dinner and you kept demanding things while I was trying to get dinner finished. You were also being loud and interrupting one another. This became very frustrating for me, but I should not have yelled. Can you forgive me?” Kids will learn as they see you labeling your emotions. It is a very healthy thing for all of you to be able to do. Don’t forget that emotions are good and important. It does not show weakness to experience an array of emotions in this life. It is healthy to teach kids that emotions are normal and that it’s OK to be experiencing a variety of feelings. That said, how we learn to respond to those emotions is a choice. We will work on this throughout our lives. I know I still am, and I find it especially true in my marriage and parenting. I continue to need to work on self-control as I deal with my own emotions. Take time to teach through the feelings your child is experiencing without condemnation. They can learn to respond more appropriately as they are taught to identify and regulate their emotions. I found the great acronym show above at Edutopia. When teaching kids about emotions, you can remember R.U.L.E.R. – Recognize, Understanding, Labeling, Expressing, Regulating.