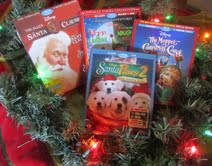 The North Pole has a new litter of playful pups! However, when the frisky foursome—Hope, Jingle, Charity and Noble—practically destroy Santa’s Workshop with their mischievous gamboling, they realize the best way to prove that they’re responsible enough to become Santa’s Helpers is to show how well they can spread the Christmas spirit all by themselves. With help from a magic crystal, they start granting everyone’s wishes. But their good intentions backfire when one unhappy boy asks that Christmas go away forever! With his wish impetuously fulfilled, and the joyous spirit quickly disappearing from the planet, Mrs. Claus and the pupshave to find a way to reverse the spell—or risk losing Christmas forever!

PREP & LANDING is an adorable holiday story about a high-tech team of elves who ensure homes around the world are properly prepared for their visit from Santa. After working for a tireless 227 years, an elf named Wayne, voiced by Dave Foley (Disney●Pixar’s A Bug’s Life, Toy Story 2, Cars), is upset when he doesn’t receive an expected promotion. Instead he is partnered with an idealistic rookie elf named Lanny, voiced by Derek Richardson (TV’s “Men in Trees”), to execute a special Christmas Eve mission. While on their journey, Wayne and Lanny encounter unexpected challenges that push them to their limits and ultimately threaten Christmas for children around the world. Bonus features include entertaining Elf training videos shot in Santa’s workshop, “Operation Secret Santa” and much more!

The Charles Dickens-inspired classic holiday story “The Muppet Christmas Carol,” will ring in its 20th anniversary with the Blu-ray™ debut of this family favorite.  Available for the first time ever on Blu-ray with high definition sound and picture, so you can enjoy even more of my blue-ness, not to mention the incredible spectacle of Kermit the Frog as Bob Cratchit, Miss Piggy as Emily Cratchit, Academy Award® winner Michael Caine (Best Supporting Actor, 1999, “The Cider House Rules”) as Scrooge, wonderful songs by Oscar® winner Paul Williams (Best Original Song, 1976, “Evergreen” from “A Star Is Born”) and, of course, my pal Rizzo the Rat as … well, Rizzo the Rat.

Celebrate the season with the entire SANTA CLAUSE trilogy in one spectacular DVD box set! Superstar comedian Tim Allen delivers the perfect gift as he stars as the big man himself in three hilarious and heartwarming movies about discovering the true magic of Christmas. See how it all began with Disney’s original classic, and hop on Santa’s sleigh for an exciting ride filled with belly laughs and family fun. Christmas gets a little nuttier when Scott Calvin unknowingly inherits the role of the legendary St. Nick. His ordinary life snowballs into a hysterical series of crazy events as he fills out his Santa suit, meets the future Mrs. Claus and faces his ultimate test against Jack Frost. With a blizzard of bonus features and three magical movies, this three-disc box set is hours of holiday entertainment your whole family will enjoy again and again.


* We received  a complimentary Disney Movie Bundle for review no financial compensation was received.