There it was wrapped in bright colored paper  waiting to be unwrapped  by my unsuspecting  soon to be 11 year old son. He held it, shook it, and persisted with his guesses of what might be in the box.  It was his birthday and the box did not resemble any size or shape of the gifts on his want list.

I on the other hand was fully aware of what was in the bright colored package – I was about to get back full time use of my Smartphone- That’s right no more ” Mom, can i play my games on your phone” or  “Mom, can I download another game”.  It was about to be all mine once again.

Are you already thinking ” Seriously, this mom is about to give her 11 year old a cell phone and he wasn’t even asking for one”.  Not exactly.

Then it was TIME to unwrap the gifts – and you guessed it he un-wrapped the brightly colored wrapped box first to discover his new MG, the 1st pocketable Wi-Fi Android app-gaming system for young people.  At first he wondered what I had given him, then the FUN began as he quickly discovered the unending hours of play, the games that were already installed in his MG and the ability to now download additional games for more play.

As the mom not only did I regain full use of my smartphone but I could already see the money saving feature of this new gaming device no more overpieed games to purchase and keep track of   – the average game download is .99 cents.

This just may be the hottest gift this Christmas Season.

MORE about the MG:

The MG is designed for young people who don’t have smartphones (52 million between 5-18 in the US). Why? Because they are too young or because their parents find the monthly data plans too expensive.
The MG is cool enough for anyone to play with a sleek design, BIG 4″ touch screen, access to over 60,000 freemium games on Google Play, 10 great games already preloaded  from EA and Com2Us, including Need for Speed, NBA Jam, Tiny Farm and Slice It, and expandable memory (unlike the iPod Touch which comes with fixed memory).
It’s not just another new gadget that kids will love, but a whole new system parents will also appreciate. It includes the  one-of-a-kind MG Family 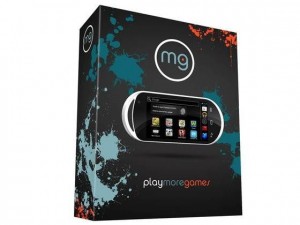 “Digital Wallet” lets parents create and manage “game allowances” through the reloadable SpendSmart™ prepaid MasterCard® for teens. The MG is the first portable gaming system to include this unique feature, allowing teens the freedom to discover, download and play the games they want from the app marketplace while staying within set spending limits defined by their parents.
“Remote Trust”  allows Parents who want more than just traditional parental controls and teh ability to to shut down access to entire activities or categories.   Parents can also opt into MG’s “Remote Trust” notification to receive email updates on MG activity, or for instantaneous notifications, can simply check on the MG device itself. Remote Trust was designed to allow young people to get the most out of their MG and the ever-expanding world of app play, but within agreed upon parameters.

Get yours NOW at Amazon.com –

Enter for a chance to win using the Rafflecopter entry form below. For every entry you do it’s an extra entry to win.
a Rafflecopter giveaway


US entries only and one entry per person. Winner will be chosen on December 8, 2012

* We received a complimentary MGPlay and compensation for this post all opinions are my own.