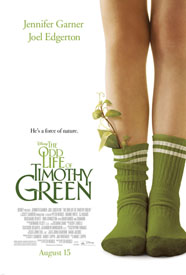 Disney chooses Academy Award® nominated novelist, playwright and filmmaker Peter Hedges, to put his magical imprint into their latest film creation The Odd Life of Timothy Green. Hedge’s has a miraculous way of breathing life into strange story lines that leave an impression. The Odd Life of Timothy Green is a powerful portrayal of the universal theme of love and family. Hedge’s writes the screenplay from a story written by one of the film’s producers, Ahmet Zappa, in 2009. Zappa artfully combines magic with the question of what it means to be a parent. He makes way to tell a convincing story of how “miracles can come in strange ways”.  Hmm, isn’t that a fun idea?

In 1993, Hedges made his debut in film when he adapted his first novel “What’s Eating Gilbert Grape” onto the silver screen starring Johnny Depp, Leonardo DiCaprio and Juliette Lewis. Since “Gilbert Grape”, Hedges has written and directed two of his own films, Pieces of April starring Katie Holmes, and Dan in Real Life starring Steve Carell. Hedges published two other novels and had twelve plays produced while working on a film adaptation from Nick Hornby’s novel “About A Boy”. It was nominated for an Academy Award® in best screenplay category in 2002. Needless to say Hedges has been busy the lasts twenty years of his life; but, nothing thrills him more than taking full advantage of being a parent of teenagers. Hedges explains, “The golden opportunity to be their dad in a particular way is running out”. He goes on to acknowledge that he was drawn to the project connecting two of his favorite themes: home and family. But, then he takes those themes to a different level of imagination. He ties together a magical experience to compel a storyline that takes a journey of the yearning to want to go home, as seen in E.T. Hedges concludes, “This film is a chance for me to make a movie that I hope will not only entertain and inspire people but, change me in the process of writing and directing”.

In the small town of Stanleyville, home of the manufactured No. 2 yellow school pencil with the head eraser, lives a sweet and loving married couple, Cindy (Jennifer Gardner) and Jim Green (Joel Edgerton). The Green’s desire and plan to have children has not come to fruition and the wait is getting harder as each year passes. Their story begins with a dream. Jim and Cindy write down a real live wish list using their Stanleyville made pencils of what they would like their child to be like and here is a part of the list: He or she would be a person who never gives up; has a good heart; be a truth teller and honest to a fault; and being sports minded would get to score the winning goal. Cindy coins these words “with a pencil anything is possible”, as they prepare their list of character traits for safe keeping and dream together of raising a family. They take their list, put it into a wooden box and bury it in their garden.

In the middle of the night a horrific storm hits the small town of Stanleyville and the Green’s hear a knock at their door. They open it and standing before them is a ten year old boy covered in dirt from head to toe. The Green’s take him in and while caring for his physical needs the boy announces that he is their son, named Timothy (CJ Adams). The Green’s slam right into parenthood 101 with no textbook advice for their unique situation the first of being in shock. The comedy of errors in educating his parents, Timothy complicates matters when he shows them an odd growth on his legs that cannot be removed until a designated time. Timothy tries to explain the peculiar sight and tells them that it is a magical growth that is a part of his existence. Cindy and Jim now know the kid is crazy but for the time being they simply accept the story. Cindy advises Timothy to never show anyone the growth for fear that he will be ridiculed for the oddity. An older female classmate, Joni Jerome (Odeya Rush) befriends him because he is different as she and notices the growth. To let him know she cares about him she clues him into her idiosyncrasy sharing, “You’re not the only one with a secret”. Timothy fins a kindred spirit in his relationship with Joni. Timothy’s magical existence is revealed to be bigger than simply a gift only meant for Cindy and Jim, but one to the whole community of Stanleyville. A gift that is only temporal.