More Than A Disneyland Dad 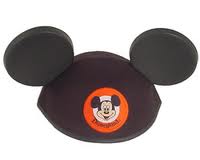 This seems like the most basic concept – some might even call it a “no-brainer”.  But, if you think about it, most of us have been fighting this idea pretty much all of our lives.  Think back to when you were a kid.  Can you remember watching your dad doing something somewhat complex and wanting to be just like him..?  Maybe it was woodworking, auto maintenance, or even building a model.

For me it was drawing.  My dad was a civil engineer.  I’m talking back in the days when architects and engineers actually DREW for a living (none of this AutoCAD stuff).  My dad would bring home rolled up plans all the time that needed a little more work than the hours at the office allowed.  I would watch him draw streets, or show undulations of a landscape feature, or even draw in something as simple as a bush.  I wanted to draw just like him.  I would sit at the table and borrow one of his mechanical pencils and start drawing my own “plans” for the City of Tomorrow.

I wanted, and expected, my drawings to look just like his.  I would sit there scribbling, measuring, erasing, and shading when suddenly hours would have gone by.  With the last mark on the last street on my futuristic city I would announce it “fini” and be ready to present it to my client.  It was usually then that I would notice how it looked compared to what Dad had been working on.  His streets were straight and proportional, while mine had varying widths and seemed to meander through the city.

No matter how much Dad would proclaim that mine was the best city he had ever seen, I was no dummy – I knew that my work was sub-par at best.  Dad would see that look on my face and gently remind me that he went to school for many, many years to LEARN how to do this job.  He also reminded me that he had been a civil engineer for some twenty-plus years and was still getting better at it even now.  Dad would encourage me to keep working on my skills, to work on drawing a tree and improving on it each time.  In other words, he was teaching me to get FIRST THINGS FIRST….

You’re a single dad.  When you started this journey you imagined you would teach a thing or two to Ward Cleaver, and now you feel like even Al Bundy could do a better job – after all at least he stuck it out with Peggy, and now you’re just hoping your kids won’t turn out as bad as Kelly & Bud (Okay, I know you’re all going to go over to www.imdb.com and check out the cast of Married With Children.  That’s all right, I will wait for you to come back)

Where were we…? Oh yeah, you’re a single dad.  I’m not necessarily her to figure out how you got here or discuss whether you should get back together.  What I am here to do is discuss what’s next – and that is to get first things first.

Whether you chose to get divorced or you fought it until the last moment, I think it is safe to say that life has pretty much fallen apart.  You are questioning everything from your own relationships, how your dysfunctional parents helped cause this, to even your relationship with God.  What matters…?

Well, I have a very profound thought on that question.  EVERYTHING THAT MATTERED YESTERDAY, STILL MATTERS TODAY.  God still loves you.  Your parents did their best, but we’re all a bit messed up, and for the most part it isn’t their fault.  You’re divorced but that doesn’t mean you don’t have personal value.  Life, as they say, goes on.  You, however, still get to decide what the journey looks like, and how that journey influences those around you.

So, my first words of advice to you as a single-dad, “It’s time to get first things first”.  It doesn’t really matter what your track record has been up until now.  Maybe you are reading this and you ARE the deadbeat dad oft portrayed on TV and in movies.  Who’s to say you can’t change.  Sure, your ex-wife isn’t going to trust you tomorrow but that’s no reason to not start making some changes today.  Most likely you’re like most of us and pretty confused and just trying to sort this all out and do the best you can, and your question is “where do I begin?”

I’m going to be pretty bold in my first thoughts on being MORE than a Disneyland Dad.  You have to decide what is important, and rather than let you figure that out on your own I’m just going to tell you.  IT’S YOUR KIDS.

You may have been married to a saint or a crazy woman – it doesn’t matter.  As adults we have to take responsibility for our own actions and shortcomings.  The kids however are innocent in all this.  Not only did they not get a say-so in whether you got divorced, they didn’t even get a say as to who their parents were going to be.  They got stuck with us, for better or worse.

So as we begin to sort this mess out, I challenge you single-dads, are you ready to set yourself aside and put your kids FIRST…?

Now, I’m not an extremist here saying you can’t date or have any fun at all until your kids are grown.  Every situation and family is different.  What I AM saying is before you date, or move, or change jobs, buy a sports car, or whatever; are you ready to first ask yourself how it affects your children and let that answer guide your decisions…?

For many of us, asking that question will make us have to look at some of the basic lessons of parenting and maybe re-assess everything we thought we already knew.  Maybe we WEREN’T really Ward Cleaver after all.  Maybe it is like my City of Tomorrow.  When I stepped back and looked at what a really good job was, I had to admit my skills needed a little honing. My dad had to point out that my trees were a little lacking.  Unless I saw that and agreed then I could never set the course for improving.

Once you’re there, then I would recommend asking others.  Until my dad showed me how I could improve my trees I didn’t know HOW to get better.  Look around.  Find some men you admire and trust – some married and some single.  Ask them to give you an honest assessment as a father and as a man.  Take a measure against Scripture. What needs to change..?

Remember, you’re not going to get it all perfect right out of the gate.  Like my drawing, I had to go back to basics – drawing a tree over and over until I could tell the difference between my stick of cotton candy and my ficus tree.  Start with one thing to be a better dad.  Keep at it until you get it right.  Trust me your kids will notice and will let you know.  When you’ve got that down, then you might be ready to draw an elm…

Most importantly, don’t give up.  I’m pretty sure that long before Leonardo da Vinci drew the Mona Lisa he drew a lot of “bean people” (side note: I loved my daughters “bean people” from just a couple years ago.  I’m almost sad that her drawing is getting so much better)