Letting Go With a Bike Lesson

“Its just like riding a bike with training wheels only you don’t get stuck in ditches” was the advice little brother Nate gave to his big brother Caleb the day we decided it was time for Caleb to learn to ride a two wheel bike. Yes, Nate was already a confident two wheel rider.

Caleb had never had any desire to ride a bike, he was happy to continue to ride in the bike cart on family bike rides being pulled along as he enjoyed the ride munching on his snacks and observing the scenery.

However, the Novotny mom and dad had decided it was time for Caleb to face the 2 wheel bike with or without tears we were determined to see Caleb ride a bike. It was one of those Parents know best moments.

I had heard my front door open and shut one to many times as Caleb arrived back in to our home because the neighborhood  children had gone from playing a game of tag to  riding bikes and scooters and after about 15 minutes  he was tired out from running after them as they rode down the street. Still with no motivation to learn to ride a bike.

So, it was time. Caleb resisted a few whines and tears but once out the door with dad and feeling secure that dad was not going to let him fall and get hurt Caleb was eager to try. After a few days of practice with dad hanging on, it was time for the big let GO and watch him GO. Another letting go experience in raising our kids.

The following few weeks Caleb enjoyed the freedom of bike riding up and down the street practicing his starts, turns and stops he rode along with the  biggest smile of accomplishment on his face.

Looking back had we as his parents given in to the whines to the tears to our own doubts of letting go and letting Caleb attempt to ride solo he would have not accomplished this milestone in his life  – we very well could have allowed the fear of failure, the doubt of abilities and the lack of confidence overtake us only to keep Caleb from attempting something he had only dreamed of doing, only wondered if he could really do it when in reality we let go and he rode away. 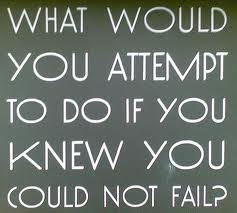 Have you ever had a dream? ever wanted to accomplish something big?ever desired to attempt something only to allow fear to keep you fromaccomplishing it?

I am guessing we could all write outa list or tell a story of the many things we have wanted to to do,accomplish or try if we knew we would not fail.

Just as  our son Caleb  climbed onto his bike full of fear of failure let me challenge you today to step out and attempt something new, something you have dreamt about.  What’s holding you back? Let go and ride off into a new adventure discovering you can do it if you Let go of your fears.

It is time to take a chance, step out, dream big, let go and ride away fearless- What will you attempt this week?   sign-up for a class, invite a new friend to coffee, write an article to be submitted to a blog, start a craft project, launch that business idea,  join a gym ?   Share your stepping out and letting go stories with us.