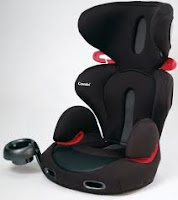 Over the years of raising my kids I have encountered several Car seat law changes and have driven my mom mobile  for the past 21 years with some sort of child restraint seat in it .  Just when I thought my youngest  child Nate-no was possibly going to exit the booster seat  the AAP decides to give us parents some new advice on buckling up our kiddos – will we listen ?  will we follow the advice they give us?  of course I will how difficult is it to have him continue to ride around town in a safe seat?  besides Nate-no loves his booster seat it is his reserved seat in our car he never has to battle with his siblings for his seat.


What are your thoughts on this hot topic ?

Below is a policy appearing in the April issue of Pediatrics, the peer-reviewed, scientific journal of the American Academy of Pediatrics (AAP).

New advice from the American Academy of Pediatrics (AAP) will change the way many parents buckle up their children for a drive.

In a new policy published in the April 2011 issue of Pediatrics (published online March 21), the AAP advises parents to keep their toddlers in rear-facing car seats until age 2, or until they reach the maximum height and weight for their seat. It also advises that most children will need to ride in a belt-positioning booster seat until they have reached 4 feet 9 inches tall and are between 8 and 12 years of age.

The previous policy, from 2002, advised that it is safest for infants and toddlers to ride rear-facing up to the limits of the car seat, but it also cited age 12 months and 20 pounds as a minimum. As a result, many parents turned the seat to face the front of the car when their child celebrated his or her first birthday.

“Parents often look forward to transitioning from one stage to the next, but these transitions should generally be delayed until they’re necessary, when the child fully outgrows the limits for his or her current stage,” said Dennis Durbin, MD, FAAP, lead author of the policy statement and accompanying technical report.

“A rear-facing child safety seat does a better job of supporting the head, neck and spine of infants and toddlers in a crash, because it distributes the force of the collision over the entire body,” Dr. Durbin said. “For larger children, a forward-facing seat with a harness is safer than a booster, and a belt-positioning booster seat provides better protection than a seat belt alone until the seat belt fits correctly.”

While the rate of deaths in motor vehicle crashes in children under age 16 has decreased substantially – dropping 45 percent between 1997 and 2009 – it is still the leading cause of death for children ages 4 and older. Counting children and teens up to age 21, there are more than 5,000 deaths each year. Fatalities are just the tip of the iceberg; for every fatality, roughly 18 children are hospitalized and more than 400 are injured seriously enough to require medical treatment.

New research has found children are safer in rear-facing car seats. A 2007 study in the journal Injury Prevention showed that children under age 2 are 75 percent less likely to die or be severely injured in a crash if they are riding rear-facing.

“The ‘age 2’ recommendation is not a deadline, but rather a guideline to help parents decide when to make the transition,” Dr. Durbin said. “Smaller children will benefit from remaining rear-facing longer, while other children may reach the maximum height or weight before 2 years of age.”

Children should transition from a rear-facing seat to a forward-facing seat with a harness, until they reach the maximum weight or height for that seat. Then a booster will make sure the vehicle’s lap-and-shoulder belt fit properly. The shoulder belt should lie across the middle of the chest and shoulder, not near the neck or face. The lap belt should fit low and snug on the hips and upper thighs, not across the belly. Most children will need a booster seat until they have reached 4 feet 9 inches tall and are between 8 and 12 years old.

Children should ride in the rear of a vehicle until they are 13 years old.

Although the Federal Aviation Administration permits children under age 2 to ride on an adult’s lap on an airplane, they are best protected by riding in an age- and size-appropriate restraint.

“Children should ride properly restrained on every trip in every type of transportation, on the road or in the air,” Dr. Durbin said.

* Children should ride rear-facing to age 2, or until they reach the maximum height and weight for their seat. (The old policy from 2002 cited age 12 months and 20 pounds as a minimum for when to turn a seat around.)

* Children should use a booster seat until they have reached 4 feet 9 inches tall and are between 8 and 12 years old.

* Children should ride in the rear of a vehicle until they are 13 years old.

Visit msnbc.com for breaking news, world news, and news about the economy