WIN: Shaun The Sheep™: One Giant Leap for Lambkind 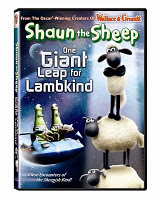 He’s Baa-aa-aack! The beloved, award-winning Shaun the Sheep™ returned for a brand new collection of barnyard adventures – and he’s not alone. The six-episode collection, Shaun the Sheep: One Giant Leap for Lambkind, arived onto DVD June 1, 2010 from Lionsgate and HIT Entertainment. Shaun and his pals will have close encounters of a different kind with old nemeses the Naughty Pigs as well new friends from a galaxy far, far away! Five minute shorts of the series currently air in the U.S. on the Disney Channel. Fans can only find full length episodes on the DVDs.

DVD SYNOPSIS:
Unidentified Farm Objects and paranormal sightings are the norm with Shaun the Sheep and his barnyard buddies Bitzer, Shirley and Timmy, as they encounter more madcap mischief along with those Naughty Pigs next door. Big laughs are evident, as the creators of the Academy Award®-winning Wallace & Gromit™ are out to prove that sheep-herding fun is universal.

“The Visitor” – All is quiet at night on the farm when a bright green glow and strange noises awaken the flock. A space craft crash-landed! Can Shaun and his woolly friends help its giant green occupant get air-borne again?

“The Bull” – Shaun learns it’s not safe to wave anything red in front of a bull. But the Naughty Pigs thinks it’s funny to add red paint to the sheep’s bath. What to do with an angry charging bull and all those red sheep?

“Hiccups” – Shirley drinks Bitzer’s lemonade too fast and gets the hiccups. Shaun tries all the usual tricks to cure her with hilarious results.

“Bitzer Puts His Foot In It” – Even with Bitzer guarding the fresh concrete the farmer just poured, Shaun and his fearless flock of friends can’t resist treating it like their own personal “Walk of Fame”.

“Save the Tree” – The Farmer wants to turn the tree in Shaun’s field into firewood, so the flock must take desperate (and humorous) measures to stop their beloved tree from getting felled!

“Shaun Encounters” – Two naughty alien kids land at the farm one night and run riot. Can Shaun and Bitzer stop them before they wake the Farmer?

WIN: 24/7 MOMS and Lionsgate and HIT Entertainment are giving away one copy of Shaun The Sheep™: One Giant Leap for Lambkind DVD

Enter for your chance to win:

US entries only and one entry per person. Winner will be chosen on July 18, 2010.

*We received a complimentary Shaun The Sheep™: One Giant Leap for Lambkind DVD for review no financial compensation was received.