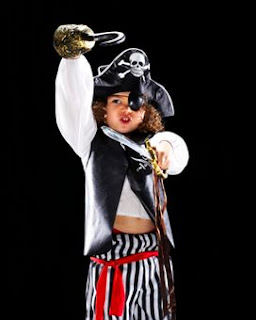 Ahoy mateys! Arrrrrrrrr you ready to think like a pirate and win some loot? International Talk Like A Pirate Day is coming soon (September 19), and in honor of such a fun-filled, swashbuckling kind of day, we have created a pirate-themed contest based on our book A Pirate’s Quest and the toe-tapping pirate tune The Peg Leg Song that inspired the book!

Do you like eating? Writing? Drawing? Then we have a contest category for you.

We will choose one winner from each category. Each winner will receive a free autographed copy of the book A Pirate’s Quest and the movie The Riddle in a Bottle (the movie with the song that inspired the book). Winners will also receive an official “Pirate Certificate of Approval,” signed by the book’s one-legged pirate and his two-legged sister (authors Robert and Laura Sams), making you an honorary pirate! Winning entries will be featured on our Web site and e-newsletter.

In our book, A Pirate’s Quest, the pirate’s sister makes delicious chocolate pirate ship cookies. In fact, “many pirates claimed they would rather find a treasure chest filled with her cookies than a treasure chest filled with gold.” Show us your swashbuckling skills in the kitchen and send us photos of your own pirate-themed cookies along with your secret recipe. Get creative and we will choose our favorites from the photographs (no food samples necessary).

Pirate Triumphant, from A Pirate’s Quest

In our book, A Pirate’s Quest, the pirate is searching for a lost family heirloom peg leg. “His one-legged grandpappy had worn it. His one-legged pappy had worn it. And he had worn it, hoping to pass it down to a one-legged son or daughter.” Here is your chance to imagine that you are a pirate, and your pirate family has lost something special. What special items could your pirate family have . . . and then lose? Write us a short story about your own family heirloom pirate adventure. 500 words maximum.

Pirate Swims on Reef, from A Pirate’s Quest

In our book, A Pirate’s Quest, the pirate’s journey leads him through many ecosystems as “he searched the lakes and followed the streams, which led to a river and out to the sea.” In the story, he passes deer, beavers, turtles, birds, whales, octopus and more. Draw your own picture of a pirate on a wild adventure. What animals do you imagine the pirate sees on his journey? Email us your drawings or send us your drawings in the mail.

How do you enter?

You may enter by email or by regular mail. Email your submissions (photographs or stories) to info@sisbro.com, along with your name, mailing address and phone number. If you enter by regular mail, send your entries to Sisbro Studios, 1925 SE Sherrett St. Portland, OR 97202 so that they arrive by September 25, 2009. You do not need to buy any of our products to enter or win. Winners do need to live in the United States (for shipping purposes). All ages are eligible.

When is the deadline for entering?

Where and when will winners be announced?

Winners will be announced on September 30, 2009 on our Web site.

Where can you find inspiration?

Check out our page for A Pirate’s Quest to see photos from the book. And check out The Riddle in a Bottle page to hear The Peg Leg Song that inspired the book. You might also get inspiration from our web site www.sisbro.com.

Good luck, and may the best pirates win!