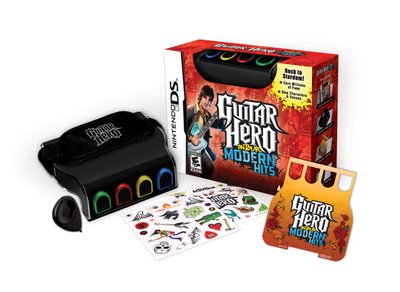 Nate-no my 7 year old son thinks it is the coolest thing when the big brown truck stops in front of our house and delivers a box containing something he gets to test out , he believes he is an official Kid Tester and takes his job very seriously.

He was asked to test out both Guitar Hero On Tour: Modern Hits game and the Guitar Hero On Tour: Decades game so that he could test out the additional features for multi players. Not only did he get his brother to play with him he even recruited neighbor kids to test out the multi player mode using both games as they competed against one another and shared songs between the two games- I guess you could call it Nintendo DS Battle of the bands.

This MOM is positive Nate-no’s new Guitar Hero games are going to bring additional fun to our family travels this summer as Guitar Hero for the Nintendo DS is the perfect take along family fun game, being we enjoy the Guitar Hero game we have for our PS3 so much.

The Handheld guitar players can now choose how they raise-up their band from the underground music scene to worldwide rock stardom in Guitar Hero® On Tour: Modern Hits. Featuring a set list comprised of 28 master tracks from influential artists including Coldplay, Fall Out Boy, Tenacious D, The Strokes and Weezer, Guitar Hero On Tour: Modern Hits expands on the innovative Guitar Hero® gameplay on the Nintendo DS by introducing an all-new Fan Request system that challenges players to jam like never before. Fret board fanatics can once again unleash their inner rock stars anytime, anywhere as they hone their shredding skills and jam to face-melting modern rock tracks from the last five years in Guitar Hero On Tour: Modern Hits.

Rock out to today’s hottest tracks – Shred along to 28 master tracks, all modern rock hits from some of the hottest bands including Coldplay, Fall Out Boy, Tenacious D, Weezer, The Strokes and more. Players will tour through five all-new venues that are as extreme as the tunes played in them.

Choose your path to stardom – For the first time ever, players can choose how they take their band from the underground music scene to worldwide rock stardom with the exciting non-linear gameplay progression in Guitar Hero On Tour: Modern Hits.

Do it for the fans – Guitar Hero On Tour: Modern Hits delivers an all-new gameplay experience with Fan Requests. By completing Fan Requests players build their fan base and open up new challenges to rock-out like never before including jamming to an entire song in Hyperspeed, battling it out in a Guitar Duel with active Bomb Notes or whammying every single hold note in a song.

Rock out anytime, anywhere – Fans can take the Guitar Hero experience wherever they go with Guitar Hero On Tour: Modern Hits. The Guitar Hero™ Guitar Grip™ mimics a guitar fret board and fits seamlessly in people’s hands to deliver the same core game play that defines Guitar Hero.

The party never stops – Song streaming features allow players of Guitar Hero On Tour: Modern Hits and its predecessors, Guitar Hero: On Tour and Guitar Hero On Tour: Decades, to share songs via local wireless connectivity. Players can rock out together in multiplayer modes, jamming to tracks from all three versions of the game.

End Result – Official Kid tester Nate-no gives it the 24/7 KID stamp of approval he thinks every kid who owns a DS should run to the store, ride their scooter or get their mom to drive them and buy their own version of Guitar Hero On Tour: Modern Hits for DS and start practicing so one day he can battle your kids.