SHHHH…. I have a secret to tell you, about a GREAT cookbook I found called “ The Sneaky Chef – Simple Strategies for Hiding Healthy Foods in Kids’ Favorite Meals “ – from cauliflower masked in mac & cheese, blueberries hidden in cupcakes to spaghetti and meatballs with 8 hidden veggies.

Sneaky Chef and Author Missy Chase Lapkin has sold more then 165,000 copies of this 2007 released cookbook which has already been placed on Amazons 100 bestselling book list as well as being on the New York Times best seller list for over 12 weeks.

So SHHHH, you can begin serving veggies tonight without a fight it will be our MOM secret, by checking out the Sneaky Chef website at www.thesneakychef.com and surfing the recipe section where you will find nutritious Mac & cheese, Power Pizza and more.

Be sure to also check out the Sneaky chef blog and other sneaky stuff on the website. 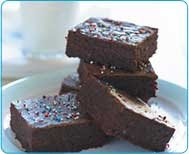 Sneaky Chef Brainy Brownies
Makes about 30 kid-sized brownies
– 6 tablespoons unsalted butter
– 3/4 cup semisweet chocolate chips
– 2 large eggs
– 2 teaspoons pure vanilla extract
– 1/2 cup sugar
– 1/2 cup Purple Puree (see Make-Ahead Recipe #1)
– 1/4 cup plus 2 tablespoons Flour Blend (see Make-Ahead Recipe #13)
– 1/4 cup rolled oats, ground in a food processor
– 1 tablespoon unsweetened cocoa powder
– 1/4 teaspoon salt – Butter or non-stick cooking spray
– Optional extra boost: 1 cup chopped walnuts
> Preheat the oven to 350 degrees.
> Butter or spray only the bottom, not the sides, of a 13-by- 9-inch or 9-inch square baking pan.
> Melt the butter and chocolate chips together in a double boiler or metal bowl over simmering water (or in a microwave, checking every 15 seconds). Remove from heat and allow mixture to cool a bit. Meanwhile, in another bowl, stir together the eggs, vanilla, sugar, and Purple Puree. Combine this purple egg mixture with the cooled chocolate mixture.
> In a mixing bowl, stir together Flour Blend, cocoa powder, oats, and salt. Add this to the chocolate mixture and blend thoroughly. Mix in the chopped walnuts, if using, then pour the entire mixture into the baking pan.
> Bake for 30 to 35 minutes, until a toothpick comes out clean. Allow to cool completely in pan before cutting the brownies and use a plastic or butter knife. Dust with powdered sugar, if desired.
Keeps for a week in the refrigerator, covered tightly.
Click to show Nutritional Analysis.

WIN this week’s featured cookbook “ The Sneaky Chef – Simple Strategies for Hiding Healthy Foods in Kids’ Favorite Meals “ by Missy Chase Lapine. Simply leave a comment on this blog or email me at trisha@247moms.com with your name, email address and your FAVORITE cookbook.