WIN: Alice In Wonderland For The Wii 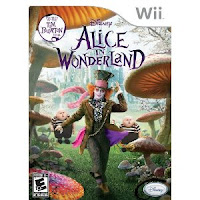 Disney Interactive Studios has released Alice in Wonderland for the Wii TM, Nintendo DS TM and Windows PC. Ten years after falling into Wonderland, the teenage Alice has fallen again. Now fans of this classic tale can join her in video games inspired by the highly anticipated Tim Burton film.

In the games, Alice and friends embark on a journey to save Underland, which has been taken over by the Red Queen’s army. Full of imagination, creativity, and good vs. evil, Alice in Wonderland is a fun-filled adventure for everyone. Players explore multiple environments, including the Mushroom Forest and the Red Queen’s castle filled with strange doors, passageways, false perspectives, and objects that come to life to enhance the journey.

“As we started developing the games, we wanted to give fans a chance to experience the beauty of Underland and explore this fantastical world,” said Craig Relyea, senior vice president of global marketing, Disney Interactive Studios. “We also wanted to give kids a unique experience on the DS so we created two very different games.

Alice in Wonderland introduces fans to an entirely new style of innovative gameplay that will challenge the puzzle solving skills of experienced players, while making the adventures accessible and enjoyable for Underland’s newest visitors. Along the way are lessons about the importance of friendships and loyalty, as well as self discovery. A variety of combat, puzzles and exploration will give all audiences something to enjoy and replay. In addition, Underland is famous for its familiar cast of characters and in the games, Disney Interactive Studios developers have followed suit, giving each “cast member” unique abilities to aid player in evading traps and solving puzzles.

The Wii and PC versions also feature an upgradeable combat system, in which players collect “impossible ideas” to unlock Underland’s secrets. Players must carefully select the supporting characters and their abilities to defeat the many enemies set forth by the Red Queen and her army of cards.

The DS version introduces a new twist as players control a cast of Alice’s diverse and enduring friends to guide her and combat the legions of the Red Queen’s army. Creating their own path through Underland using the oraculum map, players lead, protect and help Alice on her quest. The DS version features an innovative art style and unique character abilities similar to those of the Wii and PC versions. Nintendo DSi players will use the system’s camera to detect colors mapped to unlockable content when tasks are completed. Also included in the DS version is DGamer, the online community exclusive to Disney gamers on Nintendo DS, allowing players to connect with others and unlock additional items in their DS game.

Alice in Wonderland was developed by France’s Etranges Libellules and is rated E 10+. For more information, please log onto www.alicevideogame.com.

Also now available from Disney Interactive Studios is “Alice in Wonderland – An Adventure Beyond the Mirror” for the Apple iPhone® and iPod touch® priced at $4.99. Inspired by the highly anticipated Disney film from Tim Burton, the game lets users play as Alice through 10 multi-level environments, hundreds of puzzles and curious challenges. Players will be able to freeze time with the White Rabbit, make objects appear or disappear with the Cheshire Cat, use the power of Telekinesis with the March Hare or transform objects from one world to another with the help of the Mad Hatter. In addition, players can utilize a GPS, camera, photo library or simply play the game to unlock Hidden Objects in Alice’s Journal.

WIN: 24/7 MOMS and Disney Interactive are giving away Alice in Wonderland Wii game.

Enter for your chance to win:

US entries only and one entry per person. Winner will be chosen on July 4, 2010.

*We received a complimentary Alice in Wonderland Wii game for review no financial compensation was received.