Leading shower expert Susan Newton has been the go-to guru for all things baby shower, bridal shower and bachelorette party for more than a decade. Today, as “The Shower Diva,” she creates memorable events for celebrities and appears at trade shows and in the media to teach consumers how to throw upscale showers.
Bride Bingo Deluxe
Here’s a full-color twist on classic bingo — fun to play at any shower!
In this version, guests are handed colorful cards with love- and wedding-themed pictures: a sunset, a diamond ring, a bouquet, and more. One bridesmaid is the “caller,” and guests mark off corresponding items on their cards. The first person to get five in a row and yell “BRIDE BINGO ” wins!There are 3 squares on each card which allow each guest to write in the name of the bride, the groom and their wedding date. The bride will blush with joy every time she hears her name called during each game. You supply the markers (m&ms or kisses) – just be sure your guests don’t eat them while in play!! 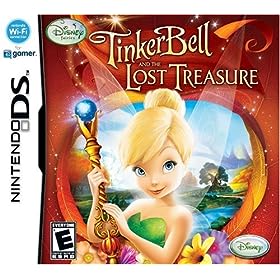 Disney Fairies: Tinker Bell and the Lost Treasure (DS)
The follow-up to last year’s first Disney Fairies video game allows gamers to play through memorable moments seen in the DVD/Blu-ray release of the same name and create and personalize up to five fairies, from facial features to hair accessories, each with different talents focusing on tinkering, light, water, animal and gardening. Building a stronger bond between you and your fully customized DS avatars is the ability to upload one personalized fairy to Pixiehollow.com – the online virtual world for Disney Fairies where more than 22 million fairies currently reside – where you can embark on exciting quests, play talent games, solve puzzles and gather hundreds of items. Tapping into your creative side, you can even craft your own fashions and accessories, bake sweet treats and build incredible furniture and décor for your home. 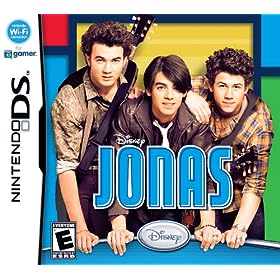 JONAS (DS)
JONAS is inspired by the Disney Channel Original Series starring the Jonas Brothers, whose characters juggle everyday school and family life as it collides with the pop star world. The game lets fans play as three of the hottest rock stars on the planet, Nick, Joe and Kevin Lucas. Players help the band, JONAS, tear up the stage in six concerts, hang out with friends Macy and Stella, and visit locations such as the brother’s firehouse and school as seen on the TV show. JONAS also features popular tunes sung by the Jonas Brothers on the show which players can jam to in performance mode. In addition, players can customize the brothers’ outfits for cool looks in school and in performance mode. In story mode, players collect musical notes to power up their guitars and then strike the right guitar chords to overcome obstacles.

I’ve Never…? The Game of Truth Board Game

What’s it about?
“I’ve Never…®” is the hottest, funniest, and most exciting party game ever! Secrets will be revealed! Embarrassing consequences will follow! Everyone will be talking about this game! Are you ready?
How do you play:
It only takes 5 minutes to learn, but you will play for hours! As you roll the dice and move around the board, you may have to dance, sing, imitate your best friend, spin 5 times in a circle, and answer outrageous “I’ve Never…®” questions. OMG!!
Is it fun?
Are you kidding? Next question please.
What’s a good occasion to play this game?
When would you not want to play this game?! You can play this game just about anywhere: at birthday parties, slumber parties, school socials, dance parties, summer camps, road trips, you name it.
Can boys and girls play together?
Yes, this is a fun game for everyone.
What if my mom or dad walk in while we’re playing the game?
Make them roll the dice and start answering some questions! If they answer a question incorrectly you might just get to watch your mom or dad suck their thumb. LOL
Will I Get Embarrassed?
Not as much as that person sitting next to you!!

Baby Alive Whoopsie Doo
Playing “mommy” is more fun than ever with this BABY ALIVE doll that “eats” and “poops” just like a real baby! Feed her or give her a bottle, and then get ready to change her messy diaper! She’ll cry and kick when she needs a change and wiggle and coo when she’s happy—so you’ll always know just how your little one needs you to care for her! Doll comes with bottle, 2 packets of doll juice mix, 2 doll diapers, rattle and t-shirt. Includes 4 “AA” POWRFUEL batteries. Ages 3 and up.

Mr Potato Head Captain Potato Chips
Yarrrr, it be the swashbuckling CAPTAIN POTATO CHIPS spud!! Mix and match the silly accessories and take to the high seas! Perch the green parrot on this spud bud’s arm and search for buried treasure. And if anyone threatens mutiny, make ‘em walk the plank!
• Your favorite potato pal comes with mix-and-match accessories that turn him into a wacky, swashbuckling spud! • Potato body comes with hat, eye patch, parrot, hook, mustache, nose, mouth, pair of ears, eyes and shoe with peg-leg accessories. • Ages 2 and up.

Kota and Pals
Soft and snuggly, this baby dinosaur hatchling figure comes to “life”! Pet its back to “wake” him up. He roars like a real dino hatchling! Its head and mouth really move! And even though he looks rough and scaly, his soft “skin” will have you petting your pet dino all day long! Your prehistoric playmate even comes with a discovery sheet so you’ll know a few interesting facts about your new friend.
• Baby dinosaur hatchling figure comes to “life” with realistic dino roars and movement! • Dino figure comes with discovery sheet. • Includes 3 “AAA” POWRFUEL batteries. • Ages 3 and up.

Stories in Music: The Tortoise and the Hare
This eighth audio release in the award-winning Stories and Music CD series for narrator and symphony orchestra is a delightful adaptation of the classic fable is set to an original score by conductor/composer Stephen Simon and performed by the London Philharmonic Orchestra.

Yadu, the dramatic and humorous narrator, tells the tale of the speedy Hare who stops to rest while racing with the Tortoise. As the Hare sleeps, the ever diligent the Tortoise lumbers by “slow and steady” and wins the race. The story is animated by a bevy of animal friends, with a French twist in the character of Mrs. Beaver who runs the bistro where haughty Hare stops for some French onion soup. You already know the ending, but it’s as fun as ever to hear it again on this musical re-telling.

Continuing the award winning tradition of beautiful music blended with great stories, this CD includes six supplemental tracks including information about the tale, how the music is composed, and a Dixieland rendition of a funny original song, “Pretzel Vendor of Paris.” The production concludes with a family sing-along. A 24-page activity booklet, including a wonderful illustration of the instruments of the orchestra, laid out in a typical staging, accompanies the CD with illustrations by nationally recognized children’s book illustrator Renee Andriani.
Composer and conductor Stephen Simon, and producer Bonnie Ward Simon originally created and performed The Tortoise and the Hare for the Concerts for Young People series at the Kennedy Center in Washington. The release of The Tortoise and the Hare confirms their continuing commitment to provide opportunities for children and their families to expand listening horizons, hone listening skills, accumulate musical memories and encourage children and adults to listen together.